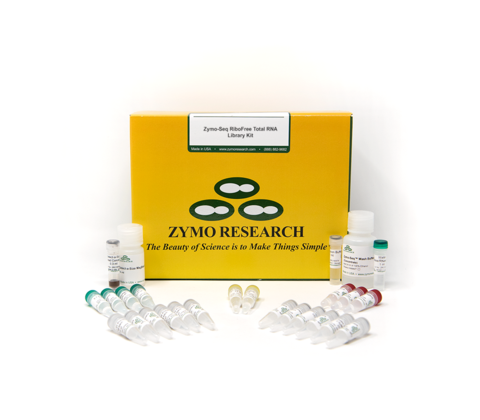 Depletion of ribosomal RNAs (which can comprise as much as 90% of a total RNA sample) is completely integrated into the workflow, using a novel, probe-free technology that removes rRNA, globin, or any other over-abundant, repetitive transcript from any sample type or species.

RiboFree Universal Depletion is validated across biological kingdom and phyla, including human, rodent, plant, and various prokaryotes, as well as RNA from a wide range of sample types including cells, tissue, FFPE tissues, and whole blood, eliminating the need to select sample-specific modules for different sample types. Just one total RNA-Seq library prep kit to deplete them all.

Because the RiboFree Universal Depletion is probe-free, researchers using the Zymo-Seq RiboFree Total RNA Library Kit will avoid transcriptome profiling bias found in other methods. High concentrations of rRNA-binding oligonucleotides used in probe-based approaches also bind to a significant number of non-ribosomal targets. As much as 20% of the 20,000 protein-coding genes in the human genome are significantly biased by these methods.

In contrast, the probe-free depletion developed by Zymo Research uses only abundant pre-existing transcripts for mismatch-free enzymatic removal of rRNA and globin, resulting in minimal off-target effects as low as 1.8% in all protein-coding transcripts.

This total RNA-Seq library prep kit’s protocol is fragmentation-free and works with up to 2 ug of undepleted total RNA, down to 50 ng of undepleted total RNA, or as little as 5 ng of ribosome-depleted RNA samples. Pre-mixed reagents are ready-to-use at every step, eliminating the need for manual master-mix preparation. Everything needed to make sequencing-ready libraries, including indexing primers, SPRI beads, and magnetic bead stand are included in the kit. It’s RNA-Seq made simple.

Q1: Do you sell the ribo depletion separately?

Q2: Will this kit work with prokaryotes?

Lower sample inputs will require a longer incubation time during RiboFree Universal Depletion. Please refer to Appendix B for suggestions

“This is probably the best RNA-seq library preparation kit I’ve used (and I have used many). It is very simple and gives clean, reproducible results at a very affordable price. I would highly recommend this product to anyone looking for a quicker and easier library preparation kit. Zymo has never let me down.”

“I think this kit is faster and simpler to do than the Truseq RNA library prep kit. It was easy enough that I tried it once and got a nice library prep, with a high concentration and I did not make any mistakes in my first try! I will definitely buy this kit and recommend it to others without a doubt.”

“This RNA Library Kit was easy to use and recovered good efficiency.”

“…very satisfied. It was easy and the depletion was effective.”