CRISPR-based diagnosis of infection and rejection with the HybriDetect 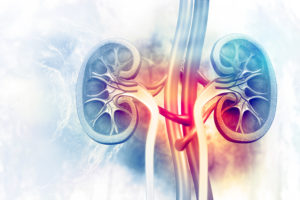 Kaminski et al. developed a fast and easy test to detect causes of graft loss in blood and urine samples from post-transplant patients after kidney transplantation.

The need for a new method to detect organ rejections is highly given, because current invasive methods can take several days and are connected with high costs. The loss of time can lead to an increased risk for patients after transplantation.

The assay is based on the SHERLOCK method, combined with Milenias Lateral Flow Assay HybriDetect, which gained lots of interest in the last weeks due to its ability for Covid-19 detection (read more). SHERLOCK is a CRISPR based method, if you want to get an insight on CRISPR and how it works you can read this article for more information.

The new diagnostic test for post-transplantation Monitoring is able to detect two common opportunistic viruses, which can lead to graft rejections. In addition, the expression status of a special mRNA that serves as a biomarker for rejection can be examined.

Cytomegalovirus (CMV): CMV-infections are usually not assiciated with symptoms in healthy individuals, but can cause serious illness (even fatal) in patients after organ transplantation.
BK polyomavirus (BKV): After kidney transplantation, the BKV can cause a gradual deterioration in graft function and ultimately even graft loss.
CXCL9 mRNA: The expression of CXCL9 increases during rejection in renal-transplant recipients, therefore CXCL9 mRNA is a useful biomarker to identify refection episodes in kidney transplant patients.

Point of Care -Diagnosis with the help of SHERLOCK

Principally, the CRISPR-based method SHERLOCK is capable to detect almost every viral infection. For the assay, described by Kaminski et al. DNA from uninfected and infected patients was isolated from blood and urine. Conserved regions of CMV and BKV were amplified by Recombinase Polymerase Amplification (RPA). A guide RNA for Cas13 complementary for the RPA product was generated. The nuclease activity of the CRISPR/Cas-complex is activated in presence of the transcribed amplificate. Nuclease-dependent reporter degradation is detectable with the HybriDetect test strips.

For CXCL9 mRNA detection, RNA was isolated from pelleted urine cells. A preamplification is necessary for a sensitive analysis. Therefore, a one-step RT-PCR was performed. After T7-transcription, Cas13-associated RNA recognition initiated collateral nuclease activity of the CRISPR/Cas-complex. Degradation of a dual labeled reporter leads to increasing test line intensity in the LFA. The Cas13-associated detection method was able to detect CXCL9 mRNA at attomolar level. The detection of kidney rejection was shown with a sensitivity of 93%.

Fig. 1: Post-transplantation monitoring of CMV and BKV with SHERLOCK from human urine and blood samples

Detection of SHERLOCK results by HybriDetect

The authors used Milenias HybriDetect for a fast and easy, but still cost effective readout of their results. With HybriDetect it was possible to see a positive or negative test result within two hours from isolation to detection. Some background noise leaded to a faint test band, and therefore the readout of the assay was difficult at very low levels of target concentration. To work around this background noise, Kaminski et al. developed a smartphone-based software application. This app is able to quantify the band intensities of HybriDetect and gives a valid test result in 1 minute (Fig. 2).

CMV and BKV (Fig. 3) were detected at different concentrations in patient samples.BKV infection in a kidney-transplant recipients could be successfully identified with the CRISPR-LFA. After the patient was treated, BKV was not detectable.

The authors also tested the lateral flow signal variability over time. The same ten BKV-positive or negative patient samples were tested on three different days. There was no variety in the results over time.

Fig. 3: Detection of CMV and BKV in patient plasma samples with HybriDetect and a smartphone app

Beside the detection of viral DNA, HybriDetect was also able to detect CXCL9 synthetic RNA down to the attomolar range. The detection method was confirmed by testing samples from two patients. In one patient, CXCL9 mRNA was detected during rejection, after treatment the test was negative. The other patient also showed a reduced CXCL9 mRNA level after treatment, but an increased amount 7 month later. Repeated Biopsy showed a chronic active cellular rejection.

Overall this work showed a great advantage when it comes to POC testing for post-transplantation Monitoring. The main advantages are the fast and cost effective tests to enable early diagnosis and monitoring after organ transplantation.

Kaminski et al., 2020. A CRISPR-based assay for the detection of opportunistic infections post-transplantation and for the monitoring of transplant rejection.