How to Discover Biases in Metagenomic Studies

The growth of metagenomic studies has revolutionized our understanding of the relationships between microbiota and the environment or health.

While this realization has resulted in many new discoveries, data reproducibility has remained a challenge. This issue spans metagenomic research across labs and stems from the fact that bias can be introduced at various steps across the metagenomics workflow, as observed by many in the field 1-6.

The problem of bias is so widespread that even submitting the same sample to two different microbiome profiling organizations can yield results that are dramatically different from one another (Figure 1).

Figure 1. Inconsistent interpretation of the microbial composition of one stool sample by American Gut and uBiome. The figure was adapted from: “Here’s the Poop on Getting Your Gut Microbiome Analyzed” Science News. 2014.

How do Biases Occur Within Extraction?

Microbial communities are complex and diverse, consisting of Gram-positive bacteria, Gram-negative bacteria, and fungi. Accurate metagenome profiling requires the liberation of DNA from all the diverse species within a microbial community. However, it is common to observe ineffective lysis during the nucleic acid extraction which then leads to microbial profile bias. This is due to some microbes being very difficult to lyse 6, 8. If the cells are not lysed, the DNA will remain locked away within the cell and will not be purified or detected.

It has been shown that processes utilizing chemical or thermal lysis overrepresent the easy-to-lyse organisms (Gram-negative bacteria) due to this very reason. Since the tough-to-lyse organisms (e.g. Gram-positive bacteria and yeast) are more resistant to DNA liberation, it causes a bias towards the easy-to-lyse species. Many extraction protocols do not account for these vast differences in sample composition meaning it is common to observe non-uniform lysis and microbial profile bias 9.

Extraction protocols that utilize mechanical lysis (e.g. sonication, blending, liquid nitrogen/mortar and pestle, French pressing, and bead-beating) are considered the best approach to microbial lysis due to their stochastic nature with bead beating referred to as the gold standard. However, these mechanical lysis methods still need to be optimized or they will suffer from issues such as low yield, excessive nucleic acid shearing, non-uniform lysis, excessive heat, and shear forces.

How Can Bias Be Discovered?

The only true way to know if an extraction system is introducing bias into a metagenomic study is to evaluate the system with a microbial standard. A microbial standard refers to a pool of various microorganisms (including both Gram-positive and Gram-negative species) that act as a mock microbial community and mimics the metagenomic populations present within samples. This standard is processed normally through the extraction workflow.

Since the abundance of each microorganism in the microbial standard is known, the results obtained from the 16s sequencing data should match closely to the standard. Large deviations from this indicate that the extraction system introduced bias into the results. Most commonly, these deviations reveal themselves as an overrepresentation of Gram-negative species in the population. This can be seen clearly in a comparison of various extraction systems (Figure 2). 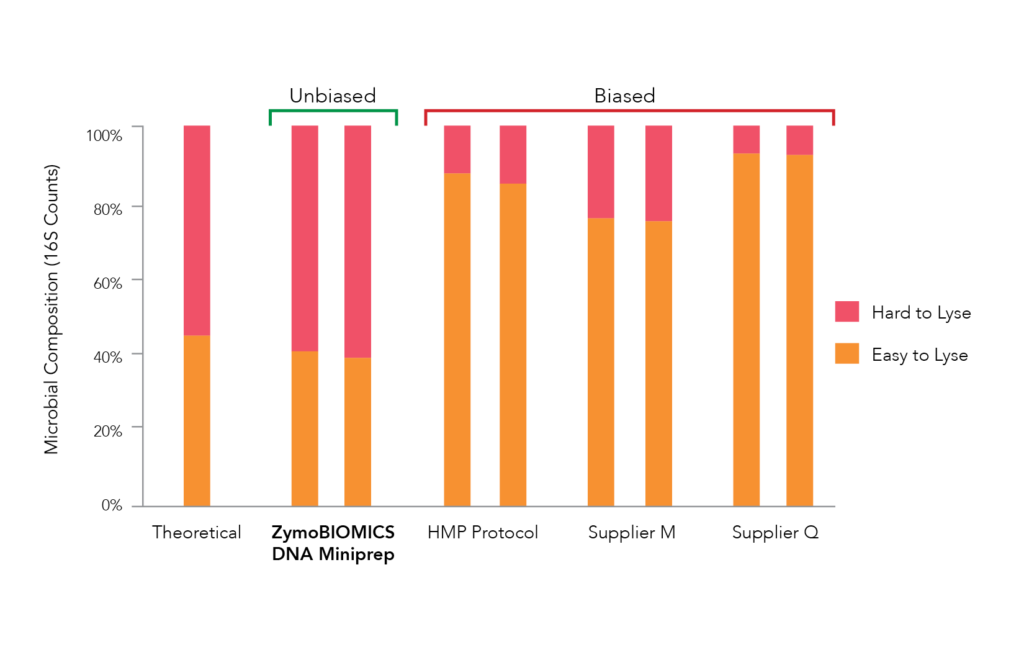 The ZymoBIOMICS line addresses this key challenge of bias within a metagenomics workflow. The ZymoBIOMICS 96 Magbead DNA Kit utilizes mechanical lysis that has been developed and optimized with microbial community standards to ensure complete lysis of all the tough-to-lyse organisms (Figure 3). 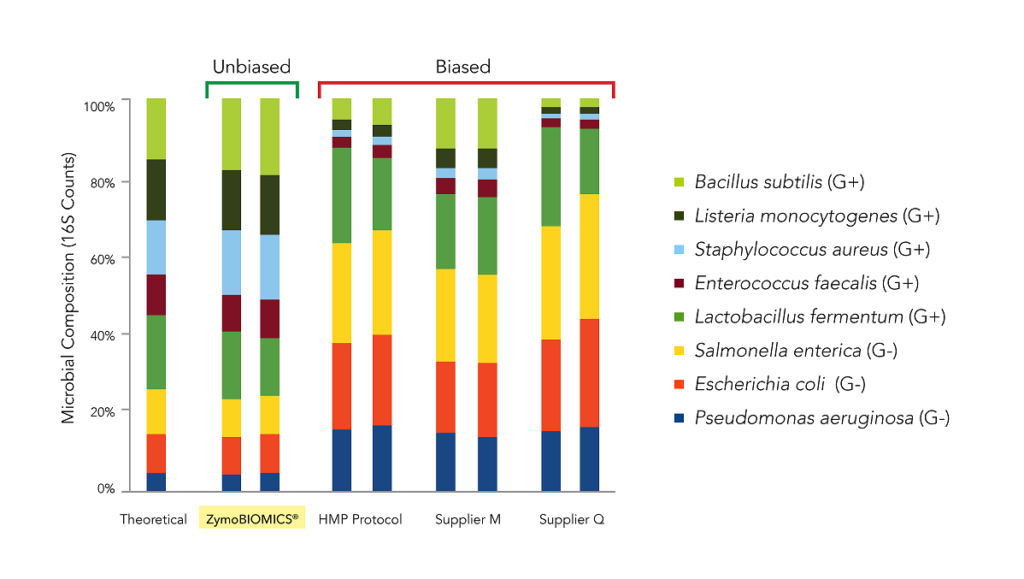