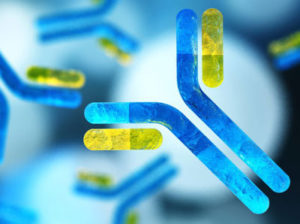 Hybridoma Technology
Specific mouse monoclonal antibodies can be produced by the Hybridoma Technology. This method results in immortal hybrid cells formed by B-lymphocytes and myeloma cells. After the main steps (immunization of the host animal, B-cell and myeloma cell fusion) the experimenter needs to know which subclass is produced by the cells in order to select an antibody clone with the desired features.

There are two variants of light chains: kappa and lambda. Regarding the light chains one variable and one constant domain exist.In contrast the heavy chains have one variable and three to four constant parts. These constant parts determine the isotype classification. As most other vertebrates, mice have five antibody-isotypes (IgG, IgM, IgA, IgD, IgE) The main antibody subclasses are formed at different stages of the immune response and have different responsibilities. The IgG isotype is once more divided into IgG1, IgG2a, IgG2b, IgG2c and IgG3 (subtypes) because of sequence varieties between the constant regions (depending on mouse strain).

The Mouse-Isotyping Kit is a lateral flow immunoassay designed for the determination of mouse monoclonal antibody isotypes, subtypes and light chains within 5 minutes. The immunoassay can be used for cell culture supernatants and/or purified antibodies.

The Mouse Isotyping Kit consists of a Universal Module (the lateral flow strips) and nine specific buffers, which you can choose according to your needs.

Beside the pure identification of antibody isotypes and subtypes, the Milenia Quick Line Mouse Isotyping Kit has many more options for possible applications and Advantages:

◉ Variableapplication: You can chose which isotypes you need to test – the dipstick is universal, the buffers for the different isotypes, subtypes and light chains can be ordered separately.
◉ Fast IgM selection: IgM antibodies can be quickly detected and selected in an early stage of hybridoma production, as IgMs are in most cases undesired when producing monoclonal antibodies.
◉ Fast, easy and low priced application to find out which cell clone produces antibodies, only one drop of cell culture supernatant is needed.
◉ Recloning advantage: if there is only few/expensive antigen available, you can search for positive clones as an easy preselection with this test system.
◉ Purification method: the optimal purification method can be chosen for the specific isotype which results in the highest yield of the antibody.
◉ Purification control: When purifying the cell culture supernatant, you can quickly detect the desired antibody in the individual fractions.
◉ Semi-quantitative detection: If you apply a standard curve with a known amount of antibody, you can check the concentration of antibody in your sample within minutes.
◉ Purity check: You can see if your antibody is clean or if you have any impurities (other subclasses, e.g.: when your antibody is not monoclonal).
◉ Field of application: The assay can be used for cell culture supernatants and/or purified antibodies.
◉ Selection of secondary antibody: Knowing the isotype of the primary antibody can help detecting the right secondary antibody in immunoassay applications.
◉ IgG2c and IgG2a detection: we offer the possibility to discriminate between IgG2a and IgG2c isotypes, which can be important for the selection of the optimal secondary antibody. In other test systems, IgG2c antibodies are often false identified as IgG2a.

First the isotype-specific Sample buffer (e.g. anti-mouse IgG1) is pipetted into a well of a 96-well microtiter plate. Subsequently the test sample of unknown antibody-subclass is added. If a complex is formed between the Sample buffer and the test sample, binding to an anti-mouse antibody on the universal mouse test strip will result in the formation of a red line.

Antibody Isotype detection in three simple steps. First, the specific antibody Buffer is added in a well. Second, the sample to be analysed is added to the Buffer. Third, the universal dipstick is added. The readout can be performed after 5 minutes of incubation.

This video shows the test procedure of the Milenia Mouse-Isotyping Kit.