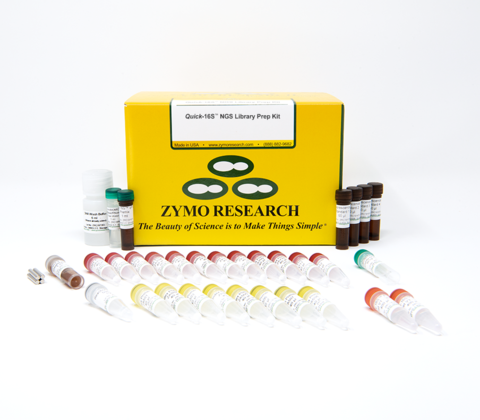 16S rRNA sequencing is a routine technique for microbiome composition profiling. Compared to shotgun metagenomics sequencing, 16S rRNA sequencing is more cost-effective and more robust; it generally requires less input DNA and is less impacted by the presence of host DNA. However, 16S rRNA sequencing has its own challenges. One major challenge is the formation of PCR chimeric sequences, which are artificial sequences resulting from the recombination of two or more PCR templates. Additionally, with common 16S primers, it is difficult to achieve both species-level resolution and broad phylogenetic coverage. Moreover, common 16S library preparation protocols used in the field have not been optimized to be cost-effective for large-scale applications.

The Quick-16S NGS Library Prep Kit aims to standardize the library preparation process for 16S rRNA sequencing. Distinguishing features of the kit are described below.

Simple. The Quick-16S NGS Library Prep Kit includes all the reagents needed to convert 96 DNA samples to a 16S library. The resulting library is directly compatible with the Illumina MiSeq without needing additional custom sequencing primers.

Accurate. The utilization of real-time PCR also enables users to control PCR cycles. This limits chimera formation and PCR bias while obtaining enough products for subsequent sequencing. In most cases, the abundance of PCR chimeric sequences is maintained below 2%.

Increased Coverage. Due to the rapid expansion of 16S rRNA databases, the insufficient microbial coverage of common 16S primer sets has become evident. Zymo Research has re-designed two common primer sets targeting the 16S V1-V2 and 16S V3-V4 regions based on the most updated 16S reference database and significantly improved their coverage.

“We first tested this kit during the beta test in 2018. We really liked it an immediately ordered full kits to change our workflow.”

“This is an excellent kit and I highly recommend it.”

“Easy to prep samples for 16S sequencing and a simple workflow.”

“I am very impressed with the clarity and language used in the protocol, always easy to follow.”

“Easy to use with consistent results!”