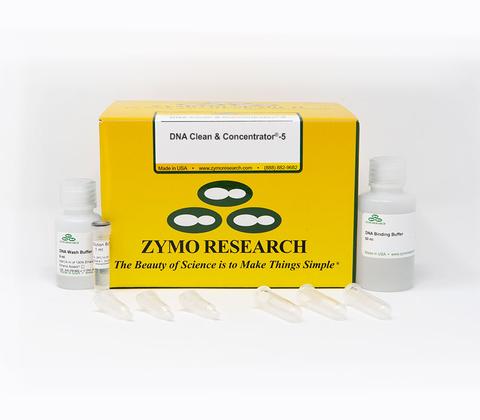 Q1: What is the difference between capped and uncapped?

The only difference is the cap. Everything else between the columns (max capacity, column matrix, etc.) is the same. Unsure which to use? It mainly comes down to preference. Some people like the capped columns for easy labeling or added security while others like the uncapped columns for faster sample processing.

Q2: What is the minimum input volume of DNA sample?

Working with volumes below 50 µl can result in decreased recovery. Zymo Research recommend raising the starting volume to 100 µl with water to ensure optimal binding conditions.

Q3: How many times can columns be reloaded?

Q4: What happens if more DNA was loaded on the columns than the stated maximum binding capacity?

Oversaturation of the column can result in total DNA loss due to clogging of silica matrix.

Q5: How can I process naked DNA stored in DNA/RNA Shield?

Add an equal volume of ethanol (95-100%) to the sample and mix well. The sample is ready-to-bind and does not require DNA Binding Buffer. Proceed to Step 2.

Q6: What is the lower limit and minimal amount of DNA that can be recovered?

Picogram levels of DNA can be recovered. The limitation is based on sensitivity of detection method.

Q7: What should I do if I did not add ethanol to the DNA Wash Buffer before starting?

The DNA will be eluted off the column during the wash step. Rebind samples using the appropriate amount of DNA Binding Buffer and wash the column with the properly prepared wash buffer.

“The elution volume is low enough to concentrate any sample very well and the efficiency is not compromised at all.”

“I had low-volume, low-concentration, high-molecular weight genomic DNAs for high-throughput sequencing that I could not get to be perfectly clean without losing a significant amount of my (precious) sample. The Qiagen products were recommended by the company doing the sequencing, and they just ate up my sample. When I received this sample with my mini-prep kit, I was at the end of the line and figured I’d give it a try, despite being warned against anything involving spin columns that may shear the DNA. It worked beautifully. We can proceed with our project. No loss of sample, the gel looks the same (no sign of DNA shearing), and what an easy and fast protocol! Thank you, Zymo!”

“I sampled this kit next to a kit we already use. I had three of the same sample, two for the Zymo kit and one for the other. On one of the ones designated for your kit, I accidentally added the sample directly to the column filter, then added other reagents (I figured I might as well try it). The other I did as per the instructions. The one on which I goofed gave a similar purification and concentration as the other kit, while the one I did properly yielded approximately four times the DNA per µL as the other kit. I am very happy with this result, and when I rerun my samples, I plan to use your product.”

“I like the enhanced design of the column as it funnels every drop of volume directly through the silica in a very efficient manner. The quick spin times and relative ease of use are also a big draw as it cuts down on processing time and allows the attack of subsequent enzymatic steps at a heightened pace.”

“It was a very simple procedure and it gave a concentration ten times the original amount.”

“It only took 2 minutes for the total procedure – shorter than my current method of PCR purification.”

“Almost no loss of elution buffer at the final step. It is quite impressive compared to the other kits I have used, which lose about 5-7µl.”

“The simple steps and washing instructions were excellent. DNA was ready for use for PCR and gave strong results.”

“This kit performed as described. I was able to obtain good quality and yield of the DNA -better than with a couple of competitor’s kits.”