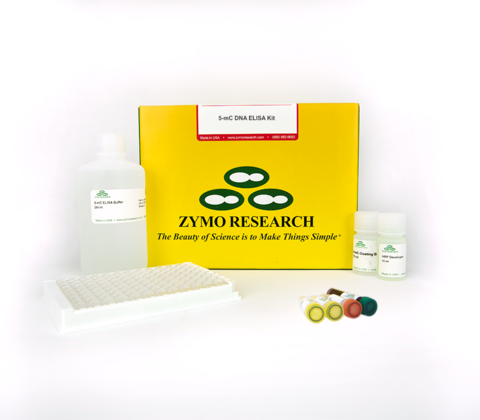 The 5-mC DNA ELISA Kit allows researchers to accurately quantitate 5-mC in any DNA sample in less than 3 hours. The kit features an Anti-5-Methylcytosine monoclonal antibody that is both sensitive and specific for 5-mC. The assay is compatible with a wide range of input DNA from vertebrate, plant, and microbial sources as well as methylated PCR amplicons and fragmented DNA. Percent 5-mC in a DNA sample can be accurately quantified from a standard curve generated with specially designed controls included with the kit. Also, the fast, streamlined workflow is ideal for high-throughput analyses.

Q1: Why is there no color development after addition of HRP developer?

Make sure the correct buffers were used to coat, block and wash the plate.
Verify that HRP developer and the Secondary Antibody were stored and prepared correctly.

Q2: How to quantify the percentage of 5-mC in a DNA sample?

2. Calculate the %5-mC for each sample using the standard curve equation. To solve the equation, determine the value of x (%5-mC) using e(y-b/m).

3. To determine the percent CpG methylation (%5mC/CpG sites) of your samples (depends on sample origin), multiply the observed ODs from the standard curve by the fold difference between E. coli (control DNA derives from E. coli), and your genome of interest (see table below). You can stop here and report your data as %CpG methylation.

From the created standard curve, the calculate %5mC of your mouse sample is 2.5%.

Q3: Can control DNAs be adjusted to low % 5-mC samples?

Yes, the control DNAs can be adjusted to be assayed for lower 5-mC percentages (i.e. 0, 2.5, 5, 2.5, 10%, etc.). The kit can accurately detect 5-mC down to 0.5%. We recommend including a 0% standard where the measured O.D. represents the background absorbance. If absorbance of the samples is above the 0% control, you can extrapolate the % 5mC from the standard curve.

Q4: How should the components of the 5-mC ELISA kit be stored?

Components will ship on blue ice and dry ice. Upon arrival make sure to store buffers at 4°C, Control DNA and Anti-5-mC antibody at -20°C. Secondary antibody can be stored at 4°C for 1 week; for long-term storage prepare small aliquots and keep at -20°C.

Q5: What is the shelf life of the ELISA kits?

We guarantee integrity of kit components for up to 6 months from date of purchase.

Yes, the kit can detect methylated cytosines in any context, the antibody is not sequence specific.

Q7: Which wavelength should be used for the ELISA?

Q8: What is the minimum input amount of DNA per well?

The kit is optimized for 100 ng/well however you can use down to 25 ng/well. The sample DNA should be assayed at the same concentration as the standards.